Here you can learn all about what we have been getting up to in our busy lives at school.

We are such a lovely bunch.... 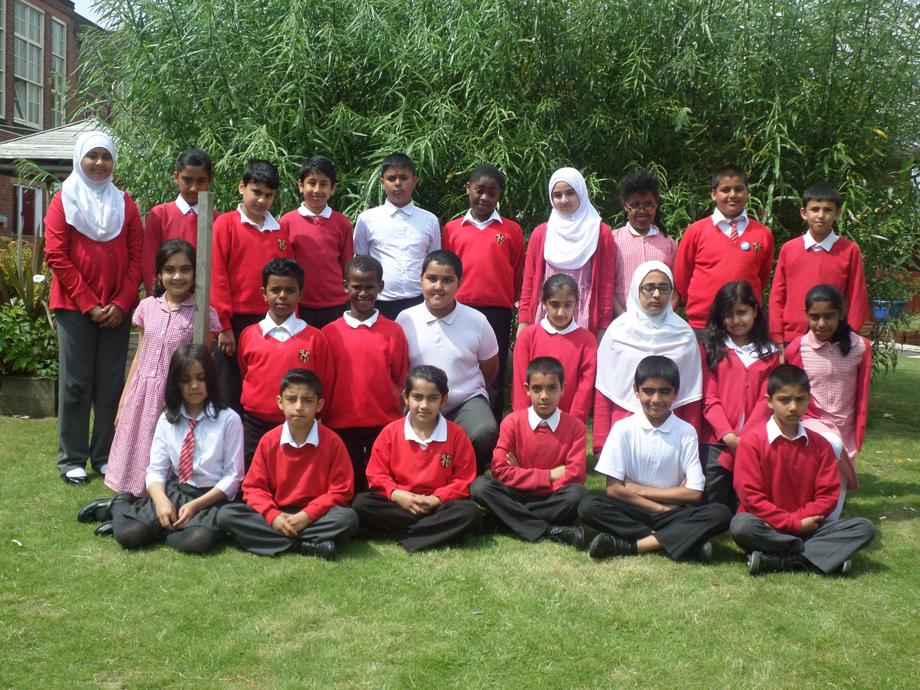 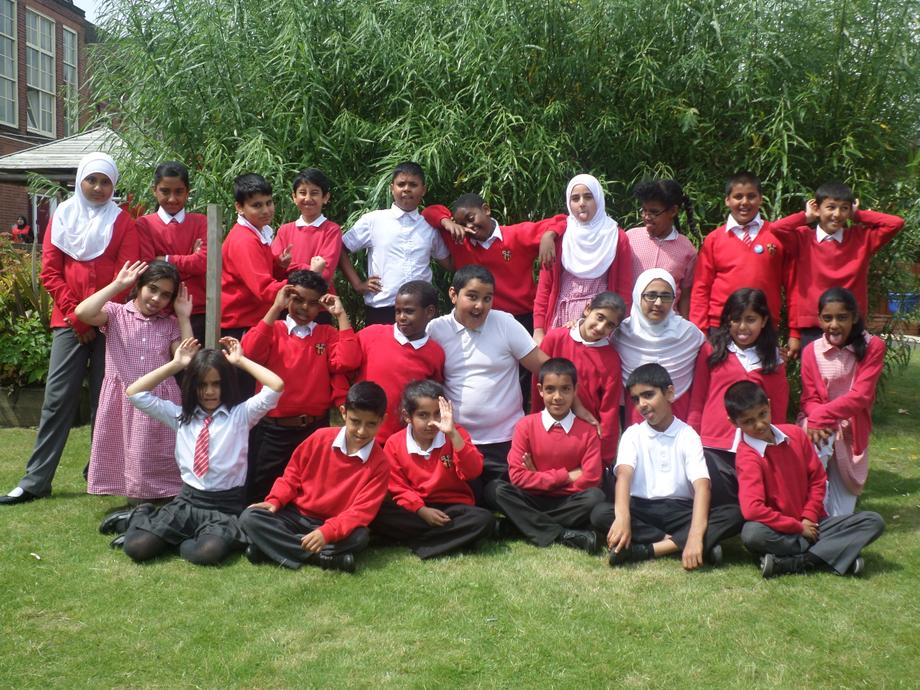 This was a very exciting and special assembly. The children did not know who had been chosen by the teachers to be head boy, head girl and prefect. Parents were invited to attend the assembly and badges were handed out infront of the whole school by Mrs Davies and Mrs Yasmeen. 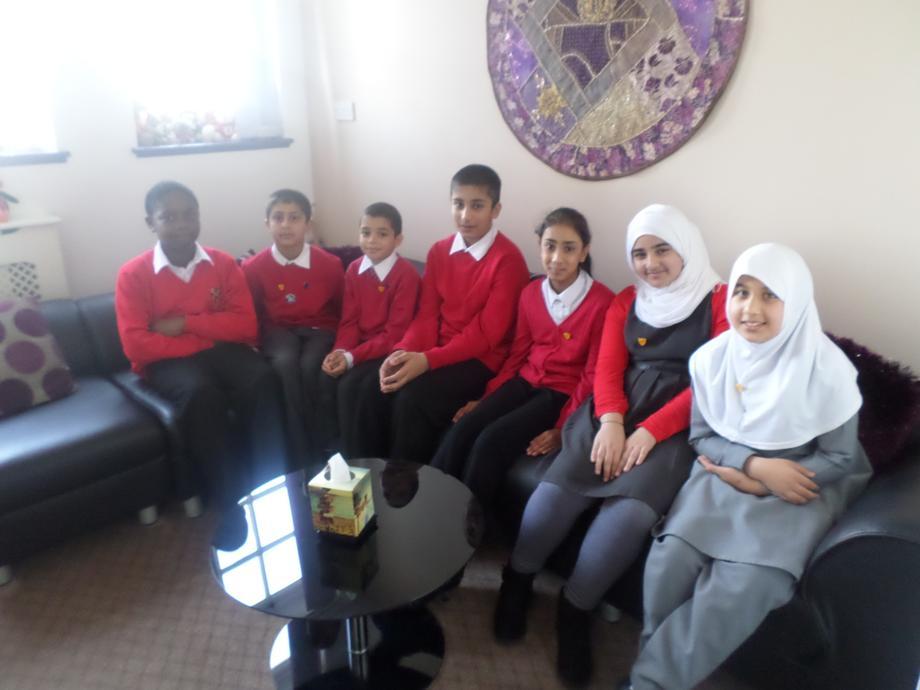 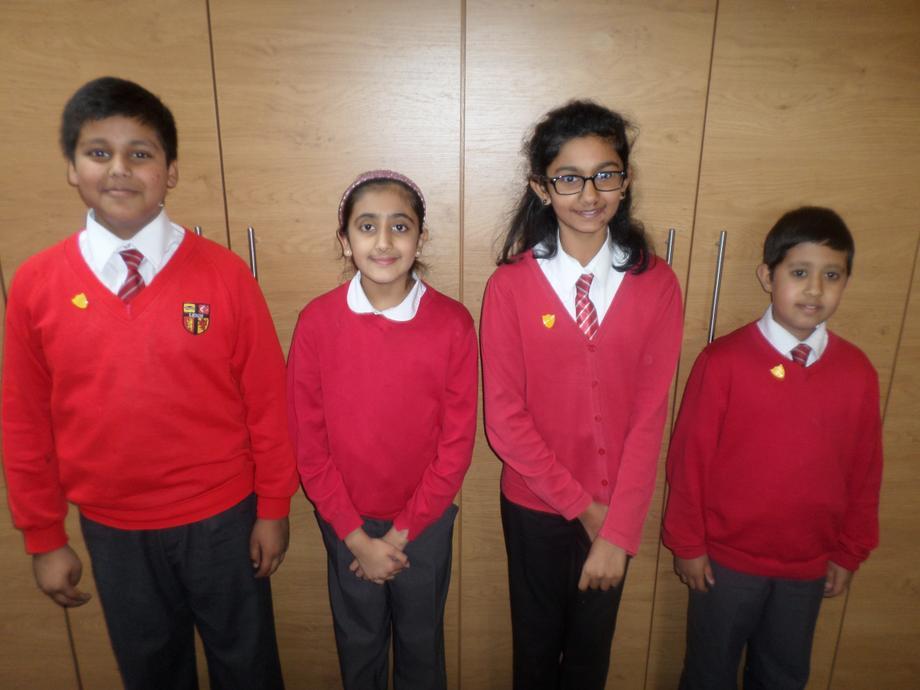 Our topic this term is on War World II. Our trip was linked to this topic, so we went to Weston park in Straffordshire. We had to pretend to be evacuees all day long and had to carry gas mask boxes around with us. We even made our own name tags and i.d cards. We did a number of activities during the day which included: Learning facts about World War II, pretending to be in an air raid, going into a real anderson shelter, making gas masks and dressing up in clothes that were worn at that time. We had great fun and learnt a lot about World War II from the trip.

Here are some of our pictures:

We celebrated Eid with our friends in school. We all came dressed in our lovely clothes. At lunch time a special dinner was prepared for us and we were given a chocolate as a treat!

In the afternoon we played party games in class and ended the day by having a boogie in the hall!

It was all great fun!

Continuing with our theme of World War II our class assembly was about the life of evacuees and how children felt during the war. Our acting was fantastic!!

We went to the NEC skills workshop to give us an idea of what kind of careers we would be interested in, in the future. Eventhough it was so busy at the NEC we got to visit a lot of different workshops and saw some very interesting things. We spoke to people from different colleges who were running workshops, we visited the BBC workshop, some children had their blood pressure and heart rate checked and some children even had their feet checked! There was a very important personality at the NEC who we saw and got very close to... NICK CLEGG (Deputy Prime Minister).

We found the trip a lot of fun, and also very useful in thinking about what careers may be right for us!

This year our Children in need day theme was 'Our Heroes'. Everyone was asked to come dressed as their hero; this did not have to be a super hero. It could be anyone that had inspired or influenced us in life.

The day started off with a very interesting assembly where some teachers and one child was chosen from each class to say who their hero was and why.

After that there was a spectacular musical performance by Mrs Powis Jones, Mr Potter, Mr Shelly and Mr Stratford for the whole school.

It was great fun and everyone really enjoyed it!

During the day the we did activities based on the charity and we watched videos about where the money goes.

Friendship day was part of our anti-bullying week. We did numerous activities on this day and through out the week, on how we could be friendly to others and not bully people. In PSHE we did role plays on how it would feel to be in certain scenarios and get bullied. In literacy we wrote a playscripts based on a short Disney pixar film 'For the Birds', about how to be friendly and include others.

During the afternoon we made friendship posters in ICT and we also created posters in class about who our best friend was and described them using adjectives. 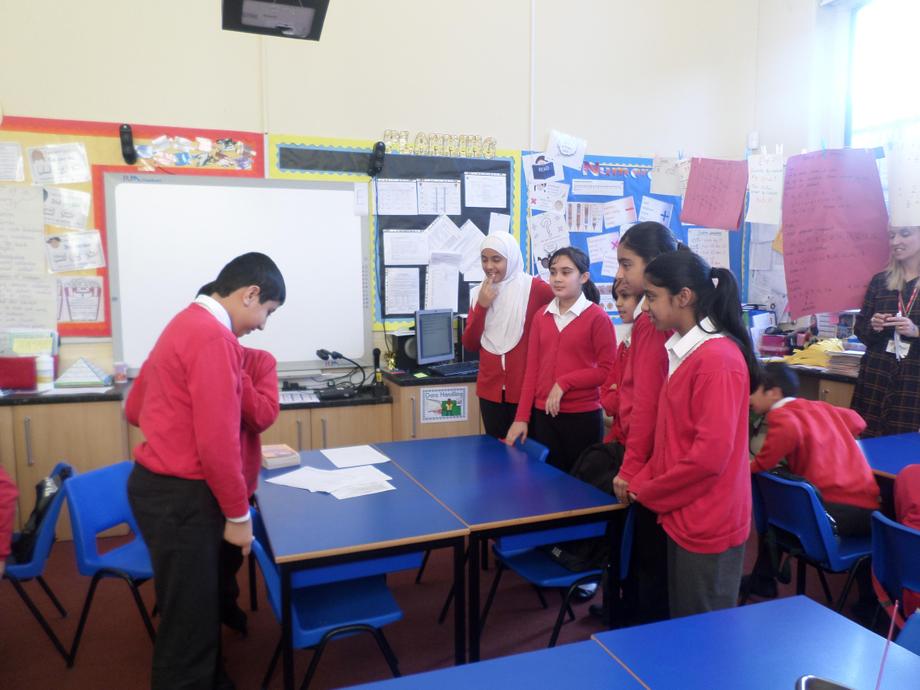 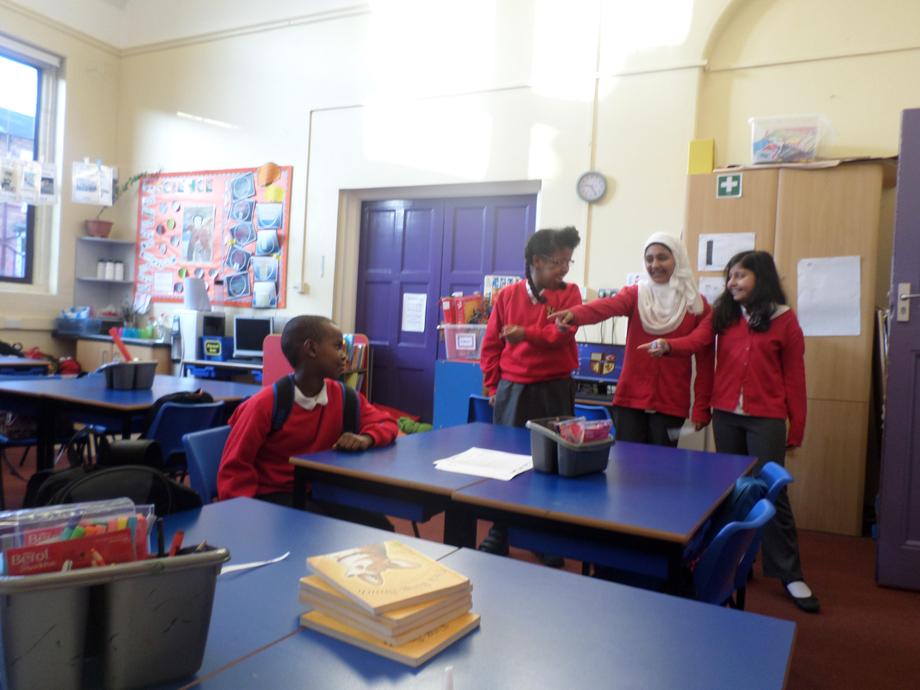 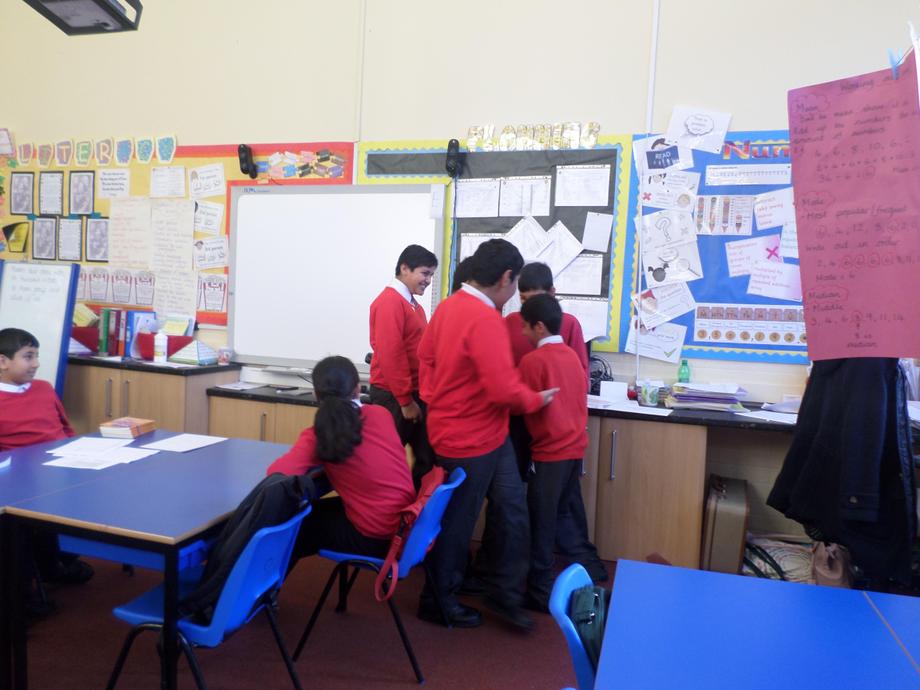 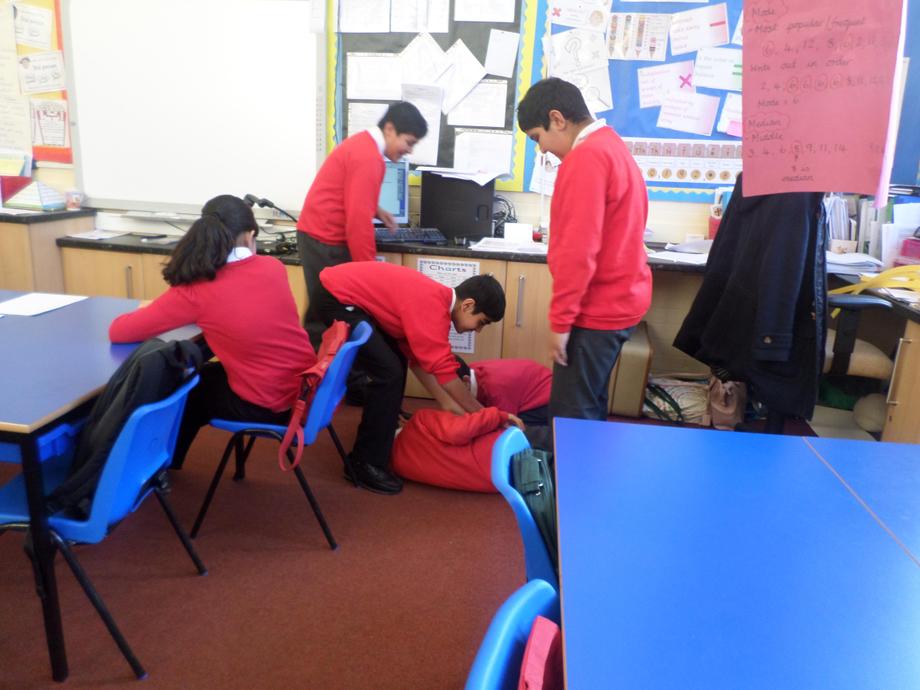 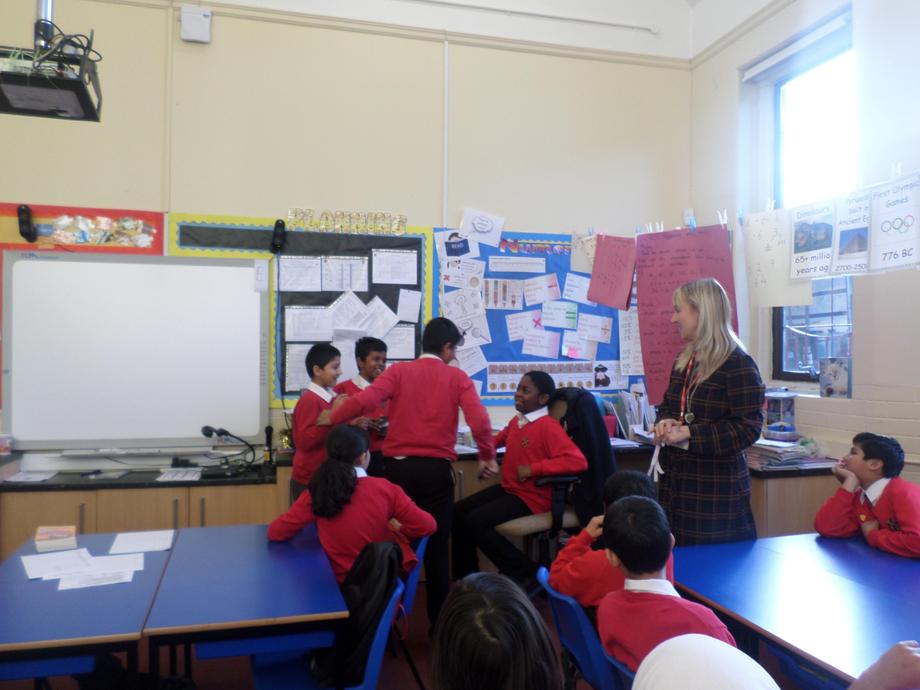 Some year 6 children went to do bag packing at Asda to help raise money for the leavers party.

The children did very well.

Well done to everyone who was involved.

Our christmas party started with a delicious lunch cooked by the kitchen staff. The tables in the hall were decorated very nicely with crackers for us all to pull.

After lunch we played some party games and had a selection of quizzes to do. We did a lot of dancing (some children more than others) and we won lovely prizes. It was all lots of fun and laughter!!

The boys had lots of fun dancing in class. Who would you say was the best dancer??

The life Education Caravan visited our school again this year. The topics discussed were 'drugs' and 'making choices'. It was a very interesting session. We learned a lot about good and bad drugs and the affect they have on the body. We were encouraged to ask and answer questions so we could make sensible choices if we were ever in that situation.

We looked at the different drugs and some of the equipment that is used to take the drugs.

To show appreciation towards music, we had a music day. Each year group had a different genre of music to look at and in the afternoon they had to perform a song from that genre. Year 6 had rock, so we learned the song 'Rockin' all over the world - By status Quo'. We had a lot of fun learning the song in class and performing it on the stage. We also got to watch all the other year groups perform their songs.

For world book day children and staff dressed up as a book character. An author came into school called Cat Weatherill. She did a whole school assembly in the morning which was very entertaining. she then held workshops with each year group. Year 6 visited her in the afternoon. She talked about her stories and how to be imaginative when writing stories.

Also, each year group was given an author to look at. The author given to year 6 was E. Nesbit. In literacy we looked at the first chapter of her story; The five children and it. We then had to turn this chapter into a play script.

We all took part in a competition where we had to design a sleeve for our favourite book.